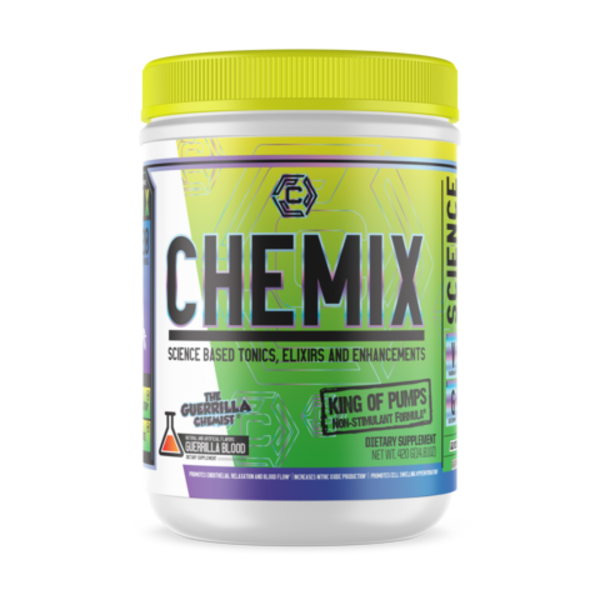 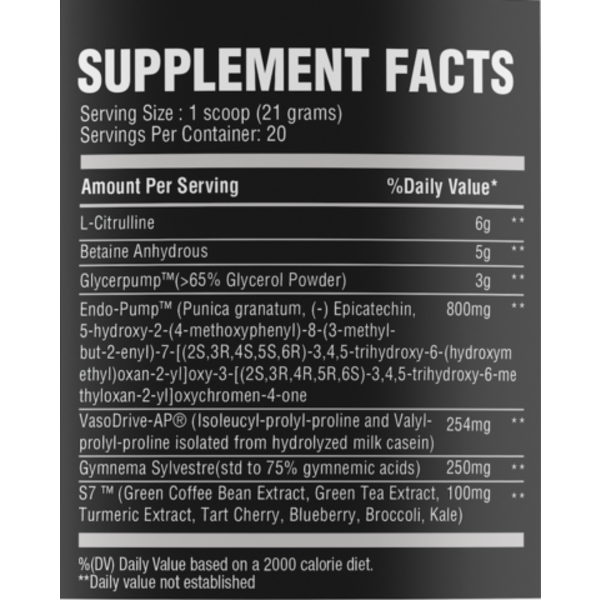 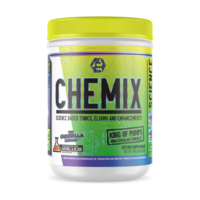 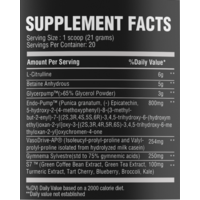 $49.99
Reviews
The Guerrilla Chemist is back with his brand new premium non stimulant formula "King Of Pumps". After a year of diligent research and development The Guerrilla Chemist has formulated the highest quality pump product on the market today. This advanced formula combines research-backed ingredients at clinical and efficacious doses with potent pump inducing ingredients to give you the perfect workout.

"King Of Pumps" is loaded with trademark ingredients that provide a valuable foundation for all your supplementation and training efforts. Chemix "King Of Pumps" supports workout performance, endurance, cellular hydration, pumps, and recovery with 6 grams of L-Citrulline, 3 grams of GlyerPump, 800mg of EndoPump, and 100mg of S7 to create muscle expansion and give you mind blowing pumps each and every time you walk through the gym doors.

HOW DOES KING OF PUMPS WORK?

King of Pumps is the ultimate non-stim, nitric oxide boosting preworkout formula. It’s packed with 7ingredients, 4 of which are branded and all of which increase NO production via different mechanisms.Every ingredient used is at the clinical dose for maximum performance benefit. This article will detail each ingredient and its mechanism of action for increasing vasodilation, giving you a crazy pump during your workout.

L-citrulline: One of the most commonly used pump ingredients, citrulline increases vasodilation via raising plasma arginine levels. Arginine is extensively metabolized by arginase largely before it can bind with Nitric Oxide Synthase(eNOS). eNOS converts arginine into NO and increases blood flow and elevates cyclic guanosine monophosphate(cGMP).

Multiple studies show that taking the same dose of citrulline vs arginine, citrulline increases plasma arginine and NO levels higher than arginine dose. The clinical studied dose was 8g of citrulline malate, which is the equivalent of 5.6g of pure citrulline. This formula includes 6g of pure L-citrulline.

Betaine: Betaine is the methyl derivative of the amino acid glycine and is found in various beets. It has many uses, including performance enhancing benefits from many different mechanisms: increased creatine production, increased GH production, stimulation of lipolysis(breaking down fat cells). However, it was included in this formula because of its ability to induce intracellular hyper-hydration.

Betaine is known as an osmolyte, meaning in can increase the flow of water into your cells. This can induce cell swelling, which not only increases performance and prevents dehydration, but also results in a nasty pump. In large doses, this can have a dramatic effect on performance and pumps. Studies show that a decrease in as little as 2% hydration can affect performance negatively by up to 20%. The clinical dose of betaine is 5g, which is the amount included in this formula.

GlycerPump™(min 65% glycerol): GlycerPump™ has become one of my favorite preworkout ingredients. It is a powdered form of glycerol, an osmolyte like betaine only much more powerful. Glycerol can hydrogen bond(attract) with water in very large quantities. Once it bonds with all these water molecules, it can drive them into your cells, blood and tissues, creating a massive cell swelling effect. This excess water can last up to 4hr before your body breaks down glycerol and you expel the excess water. One study showed that ingesting glycerol before exercise increased time to exhaustion by 28%. Glycerol is the perfect preworkout ingredient to get crazy pumps that last during your entire workout.

VasoDrive-AP™: VasoDrive-AP™ is a newer ingredient to hit the market and is a very unique one. It’s a vasodilator, but it works differently from any other pump ingredient out. VasoDrive-AP™ consists of 2 lactotripeptides: Valyl-prolyl-proline and Isoluecyl-prolyl-proline. These 2 molecules act as inhibitors of the enzyme angiotensin converting enzyme(ACE), an enzyme that causes vasoconstriction, increased blood pressure and heart function. There are 30 studies on these lactotripeptides and their effect on vasodilation, blood flow, and decreased blood pressure. One study showed that ACE can dramatically inhibit physical performance, presumably from lack of blood flow which carries oxygen and nutrients to your muscles. Data also suggests that VasoDrive-AP™ works better the longer you take it.

This ingredient adds a completely different mechanism for increased blood flow and is used at the clinical of 254mg. S7™: S7(SPECTRA7)™ is a new ingredient that was just released late last year. It, like VasoDrive-AP™ has a completely new and different mechanism of action for increasing vasodilation. S7™ is made up of a proprietary blend of 7 plant-based ingredients that work in increase endogenous NO production by 230% according to one study. S7™ works by inhibiting mitochondrial and cellular reactive oxygen species(ROS) generation via antioxidants by up to 17%. Free radicals and ROS can damage cells and your mitochondria, which is where your body produces ATP(energy). The study also showed a reduction of the O2 radical and the generation of hydrogen peroxide(another free radical generator) by 14.8% and 44.5%, respectively. By inhibiting ROS and inflammatory enzymes like TNF, the bioavailability of NO was increased by 230%. This happens bc NO is also a radical and can bind to ROS and free radicals(due to unpaired electrons), rendering it useless for vasodilation. NO production was shown in a dosedependent manner, with as little as 50mg being effective. We used 100mg of S7™ in this formula.

Gymnema Sylvestre(std to 75% gymnemic acids): Gymnema sylvestre is a common ingredient in glucose disposal supplements because of its powerful mechanism to shuttle carbs to your muscles. But, shuttling carbs into your muscles can also create a massive pump, which is why I included it in the formula. Gynmemic acids increase the release of insulin from your pancreas. Insulin, the most anabolic hormone in the body, then drives whatever carbs you have in your system into your muscles to create glycogen. It also increases regeneration of pancreatic islet cells to enhanced enzyme mediated uptake of glucose. This can have a major pump effect on your muscles, not just from the carbs but the water carbs bring with them. Gymnema also has a strong antioxidant effect, which compliments well with S7™. The dose of gymnema is 250mg, with 75% gymnemic acids. The pump will be greatly intensified if carbs are consumed pre workout.

Endo-Pump™: Endo-Pump™ is an ingredient blend that I actually designed myself. It’s a blend of 3 different natural plant extracts in a specific ratio that includes polyphenols and nitrates to increase blood flow and blood vessel diameter. Each ingredient has plenty of human studies backing up that they do, in fact increase vasodilation all via different mechanisms of action. One ingredient works via the eNOS pathway, like arginine and citrulline. Another works on endothelial relaxation, which increases blood, oxygen and nutrient flow and blood vessel diameter. The last ingredient works as a phosphodiesterase 5(PDE5) inhibitor which increases the production of NO naturally by increasing cGMP which causes vasodilation. Prescription PDE5 inhibitors are commonly used for erectile dysfunction because of this mechanism. Together in the right ratio, Endo-Pump™ maximizes vasodilation and NO production to give you the ultimate pump in the gym.

King of Pumps is a non-stim, multifaceted approach formula designed to maximize vasodilation, NO production, cell swelling and hyperhydration, and glycogen-induced pumps during your workout. As you just read, there are multiple pathways by which King of Pumps will allow your muscles to be flooded with blood and water for the most intense pumps you can achieve.